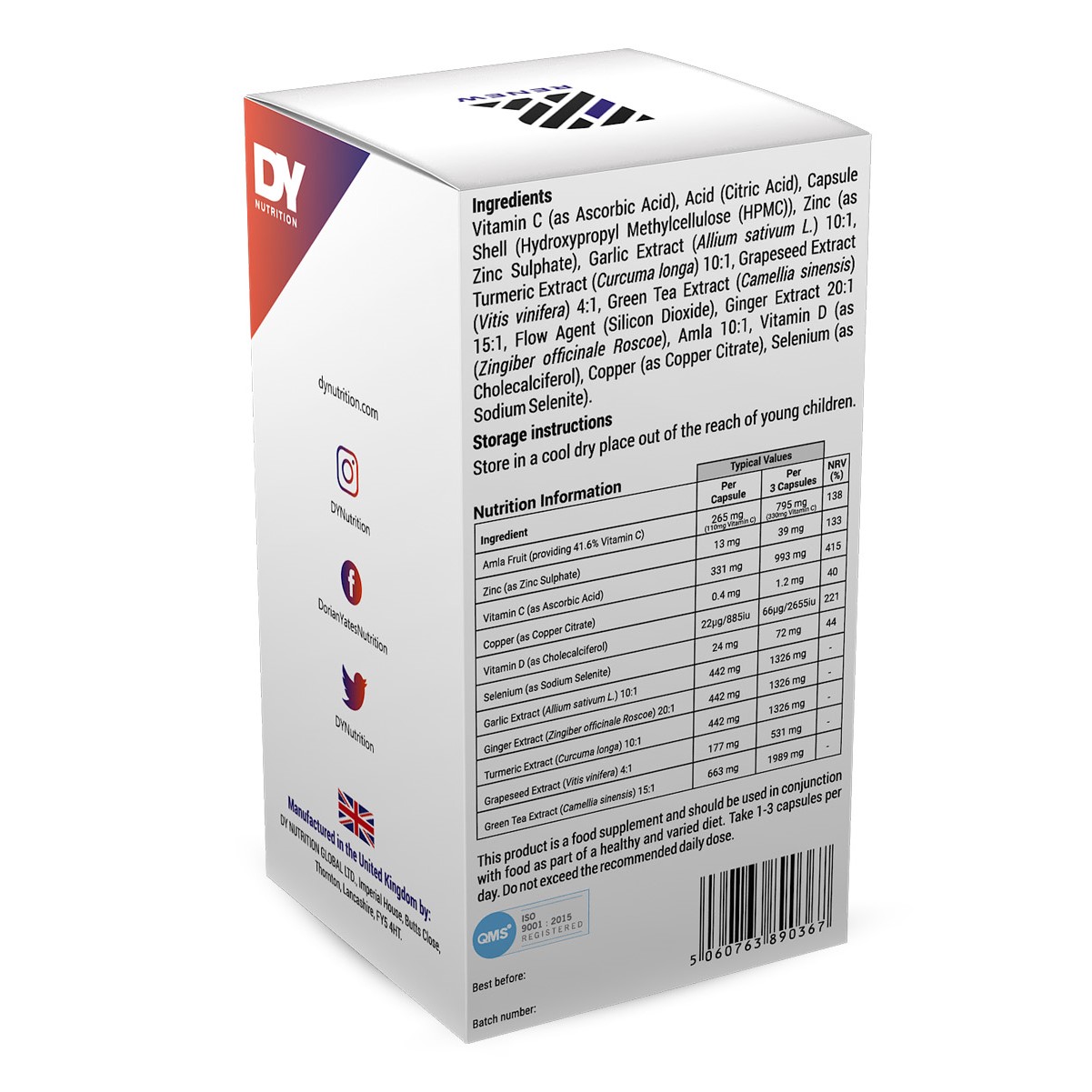 Dorian Yates’ Immunity is a formula that has been carefully formulated with essential vitamins, minerals, and plant extracts to help support immunity, as well as contribute to the reduction of tiredness and fatigue, normal functioning of the nervous system, and to protect the cells from oxidative stress.

HOW DOES IT WORK?

Dorian Yates’ Immunity exerts its effects through expert combinations of key
immunomodulatory ingredients such as the immuno-essential Vitamin D, Vitamin C, Zinc, Copper and Selenium, plus superfood powerhouses such as the purest and most natural form of Garlic extract, Ginger, and Turmeric, as well as supplementary ingredients including Grapeseed and the all-powerful Green Tea extract, that work synergistically with the above to bring about maximal possible immunity to a multitude of infections.

The immune system is complex and vast meaning it needs to be supported from various angles, hence the addition of complementary ingredients with an extensive evidence base and validation.

Also known, in a dietary sense, as cholecalciferol (Vitamin D3) and ergocalciferol (Vitamin D2), Vitamin D has had more and more evidence surface over time pertaining to its immune application. Perhaps most notable is a Vitamin D receptor expressed on immune cells, literally the front line of our immune system (well, other than our skin of course). These immune cells (B cells, T cells, and antigen-presenting cells) are all capable of synthesizing the active vitamin D metabolite, an attribute that enables Vitamin D to modulate the innate and adaptive immune responses.

Like Vitamin D, Vitamin C also warrants inclusion in The European Commission, (2012) permitted claims repository, stating ‘Vitamin C contributes to maintain the normal function of the immune system during and after intense physical exercise’. The commission stipulates that “This claim may be used only for food which provides a  daily intake of 200 mg vitamin C. In order to bear the claim information shall be given to the consumer that the beneficial effect is obtained with a daily intake of 200 mg in addition to the recommended daily intake of vitamin C”.
To summarize, Vitamin C is important for the general immune system provided the recommended daily intake, or reference nutrient intake (RNI), is met i.e. 40mg per day for an adult. Therefore, in order for the immune system to benefit from the immuno-protective properties of Vitamin C after bouts of stress, such as exercise, you would need to be consuming an additional 200mg Vitamin C on top of the 40mg RNI. Dorian Yates’ Immunity provides you with 750mg Vitamin C in the form of 100%  Ascorbic Acid, meaning you truly are benefiting from the immuno-protective properties of Vitamin C.

The European Commission, (2012) clearly states ‘Zinc contributes to the normal function of the immune system’, a claim that is backed by a multitude of research papers that corroborate zincs ability to affect multiple aspects of the immune system. Specifically, Zinc appears to mediate the normal development and function of cells involved in innate immunity, cells such as neutrophils and Natural Killer cells. If the body is deficient in Zinc for any period of time then Macrophage development is hindered, as well as negative impacts on phagocytosis, intracellular killing, and cytokine production, processes critical to fending off infection. Zinc deficiency also contributes to improper growth and function of T and B cells, key components in
immunomodulation.

Once again, Dorian Yates’ Immunity only contains evidence-backed ingredients, with Copper’s validity being no exception. The European Commission, (2012) again, asserts that “Copper contributes to the normal function of the immune system”, recognition that positions Copper as an essential component in any immunity supplement. Although the exact mechanism of Coppers action in supporting the immune system is not yet known, it is clinically accepted that Neutropenia (abnormally low numbers of white blood cells) is a sign of copper deficiency.
Experts have deduced that there is clearly a role for Copper in leukocyte (white blood cell) differentiation, maturation, and proliferation.

Most people know Selenium for its role as a potent nutritional antioxidant, specifically its involvement in the aptly names seleno-proteins. These so-called seleno-proteins are involved in regulating reactive oxygen species (ROS), or free radicals, in nearly all tissues in the body. For this reason alone, Selenium is well regarded as a key nutritional component in inflammation and immune response. Selenium is thought to boost immunity, especially in aging immune systems where the immune responses to certain pathogens become less effective. Selenium forms a part of certain anti-oxidant enzymes such as glutathione, which in and of its self, offers protective effects to the body through priming white blood cells including natural killer and T cells.

Garlic (Allium sativum) is a bulbous vegetable that we all know and love for its ability to add depth to any dish, however despite its ability to please the taste buds, it also provides exemplary nutritional value. Garlic offers an unrivaled nutritional medicinal punch, few foods can hold a light to the medicinal properties that Garlic brings thanks to its secret ingredient, a molecule called Alliin. Alliin is the first part of this amazing vegetable story for health and wellbeing, especially immune function. When Garlic cells are broken through chewing, cutting, crushing, or grating, the Alliin metabolite known as Allicin is released. Allicin is where it starts to get really interesting, this metabolite turns into a variety of water and fat-soluble sulfur-containing compounds which produce hydrogen sulfide… the main reason for the distinctive whiff associated with Garlic consumption, and also why this groundbreaking supplement comes in capsule form (we’ve literally thought of everything). The production of hydrogen sulfide results in interaction with the hydrogen sulfide signaling system, a system capable of relaxing blood vessels, reducing total cholesterol and Low-density Lipoprotein, whilst simultaneously increasing the ‘good’ High-density Lipoprotein. It is this hydrogen sulfide signaling system that exerts Garlics’ apparent anti-cancer effects too. All of the beneficial components of garlic can be found in fresh garlic, hence Dorian Yates’ Immunity uses only the finest Garlic extract to ensure all of the beneficial compounds remain intact.

Turmeric is a plant from the ginger family, its rhizome or ‘underground stem’ (not to be confused with the root) is what is commonly used as a spice in cooking. Dried and ground, Turmeric is one of the main spices in curry powder and when consumed either via the diet or through supplemental form, can offer an array of health benefits for arthritis, digestive disorders, respiratory infections, allergies, liver disease, depression, and more. However, it is not the only Turmeric that is directly responsible for these benefits, but more so its bioactive compound Curcumin. It is the polyphenol Curcumin and the related Curcuminoids that gives Turmeric its distinctive yellow color, as well as its health and immune-boosting properties.
Curcumin is important to immune function through its ability to increase the levels of endogenous antioxidants in the body, and Turmeric extract provides ample quantities of this important bioactive substance. Dorian Yates’ Immunity deliberately uses  Turmeric over Curcumin because you get the best of both worlds in that Turmeric contains a plethora of other Curcuminoids that provide benefits that curcumin alone does not.